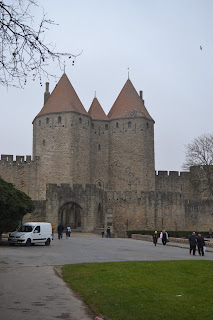 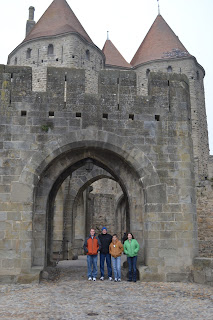 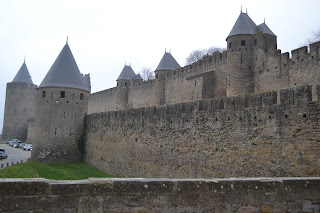 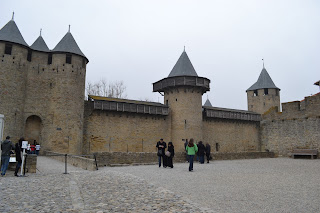 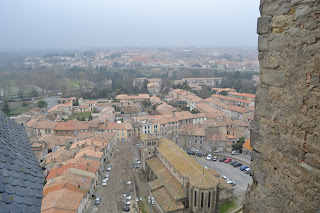 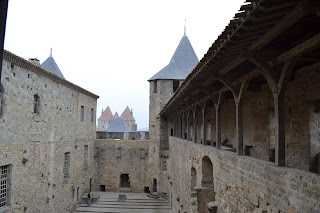 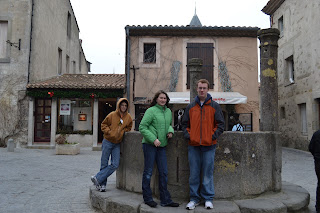 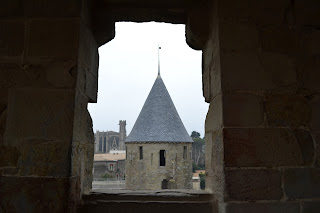 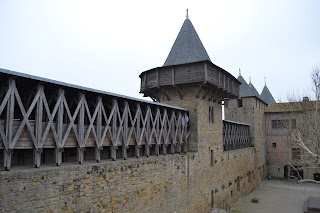 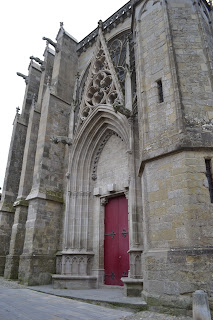 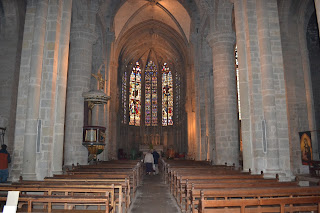 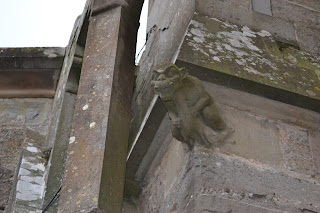 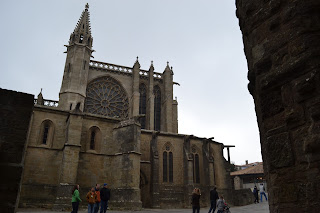 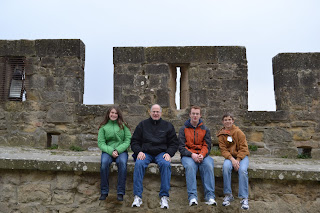 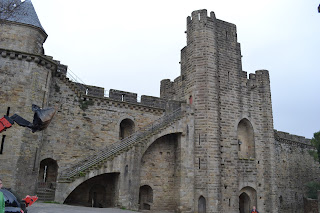 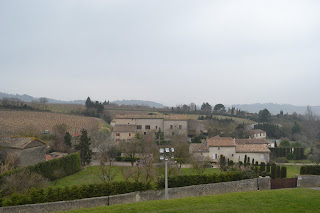 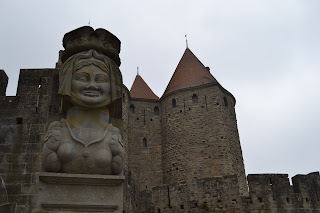 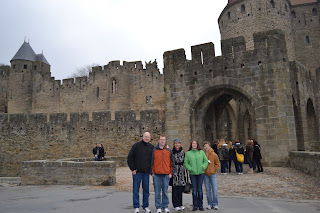 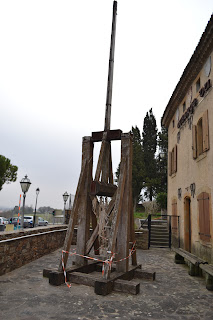 Sunday we all woke up with the intention of getting on the road by 9:30 am since we had an hour drive to our destination today - by 9:45 we were in the car and ready to go!  I checked the weather for the day before we left and I'm not sure how this is possible, but we had 100% humidity with only a 20% chance of precipitation - hummmm, sounded like a bad hair day to me so I grabbed my hat! Sure enough - it never rained but the air was damp.

Carcassonne - another city within a fortress was very interesting to tour.  The outside of the city looks like a fortress- a huge stone wall with many turrets surrounding the city. The Chateau inside is a fortress within a fortress and looks like something out of a fairytale, complete with a castle, drawbridge, and moat (dry)!  We arrived on Sunday when the weather was gray, overcast, misty and chilly - not good for beautiful pictures, but it added to the medieval admosphere.

The area of Carcassonne had once been a border town between France and Spain until the treaty of the Pyrenees in 1659 when the Roussillon area, once a Spanish possession, became part of France.  Prior to this, Carcasonne played a large role in protecting the French border.  The citadel of Carcassonne is a perfectly restored medieval town.  It crowns a steep bank above the river Aude, a fairy-tale sight of turrets and ramparts overlooking the Basse Ville below. The original Roman settlement took place in the 2nd centruy BC and it was at it's peak in the 12th century when it was ruled by the Trencavels who built the chateau and cathedral you see in the photos above.  Due to many of the military battles - ie: religious conflicts that the citadel encountered, a restoration of the city took place in the 19th century and was led by an architectural historian by the name of Viollet-le-Duc.

The original city was surrounded by a second wall as an extra layer of security - according to the audio tour that we listened to, the outside wall was the initial protection of the ciy, if that wall was penetrated, the second wall protected the inner city with turrets and areas where the romans would shoot their weapons and hurl their catapult ammo at the incoming armies.

This is a link to more information regarding the history of Carcassonne if you are interested - it was truly fascinating (especially the murder doors in the Chateau!) but too much for me to remember accurately !
http://goeurope.about.com/gi/o.htm?zi=1/XJ&zTi=1&sdn=goeurope&cdn=travel&tm=17&gps=285_393_1362_555&f=10&tt=14&bt=1&bts=1&zu=http%3A//perso.wanadoo.fr/bbcp/english/index.html

We spent most of the day touring the Chateau, the beautiful cathedral (see the gargoyal above which is on the side of the cathedral - now a Bascilica (Basilique St-Nazaire), and climbing the walls (literally!) and then headed home which was another adventure in itself!

Since we have been traveling east from Montpellier until now, we have never entered our nice little town from the west - we tried last night and of course, got lost!  I'm not sure how we did it, but somehow, we managed to start over (from the same point), make different turns to remedy our former mistakes, and always end up in the same spot!  After 30 + minutes of this, we decided to get back on good ole "A9" and figure it out from there - we got off on exit 29 - the same exit we've used in the past and made it home safe and sound - from now on - Exit 29 is our exit!
Posted by La Famille Burns at 10:20 AM