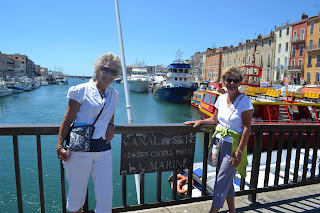 Mont Faron is a mountain overlooking the city and roadstead of Toulon, France. It is 584m high. At its peak is a memorial dedicated to the 1944 Allied landings in Provence (Operation Dragoon) , and to the liberation of Toulon.
The top can be reached either by a cable car from Toulon, or by a steep and narrow road which ascends from the west side and descends on the east side. The road is one of the most challenging stages of the annual Paris–Nice and Tour Méditerranéen bicycle races.-(Wikipedia)

Mr. Boisson highly recommended our visit to Mt. Faron while we were in Toulon so on Sunday we loaded everyone in the bus, got out the map of Toulon that Andrew had picked up from the Office of Tourism and tried to find the right road. After several twists and questionable turns, we made it to the bottom of the mountain and determined that yes, indeed, we should take the gondola and NOT attempt to drive up the twisty turny roads of Mt. Faron.  Unfortunately Adam was not excited about this outing and said he was staying at the bottom (not because he was afraid of the ride, he just didn't want to go - hummmmm).  We told him that he could not stay at the bottom by himself, bought the tickets and boarded the car.  The ride to the top was uneventful and the view of Toulon was beautiful! We enjoyed looking down into swimming pools and checking out the road that we would have taken had we decided to attempt the drive - we made the right decision to take the gondola!

At the top, Adam decided to hang out in the area where the gondola dropped us off while the rest of us went exploring.  Although we all felt bad that he was out of sorts and didn't want to join in the adventure, he seemed to be safe where he was, and he was next to a restaurant in case he needed anything.

The rest of us took some pictures of the gorgeous views and headed up the road to the memorial.  Suddenly we began noticing bikers (on bicycles, not motorcycles!) passing us while people handed the riders bottles of water.  We realized that earlier in the morning, when we had been at the beach near the house, we saw a swimming race and watched as the swimmers got out of the water and began running - we decided that we were, throughout the course of the day, witnessing a triatholon-And a difficult one!!  Swimming in the mediterranean, running and the biking up a mountain - these folks were in shape!  We saw only one ambulance come screaming up the mountain to help a fallen cyclist.

After walking for awhile we decided it was time for some lunch and headed back to the restaurant where Adam was.  We all ordered our food, some of us had a beer, Adam stayed where he was and refused lunch.  A couple of dogs wandered around outside and peaked in the door hoping for a snack but eventually they got tired of staring at everyone and went to lay down in the shade.  Lunch was delicious (various forms of crepes) and when it was gone we went out the door to get ready for the ride back down the mountain.  When the gondola began its desent, the car started swaying in the wind - I must say, it was a little nerve wracking blowing back and forth.  Our "driver" even had to stop the car at one point to allow an oncoming, empty gondola to pass us (when one goes down, the other goes up).  We did make it to the bottom safely, debarked and THEN noticed a big sign (see above) that said: "FERME - POUR CAUSE VENT DE VIOLENT!"="CLOSED BECAUSE OF VIOLENT WINDS" - Yikes!  I'm glad that sign wasn't posted at the top, we would have walked the twisty road down the mountain.

Back at the house, we began packing up, cleaning up and getting everything back in order for the Boissons' next set of visitors. Everyone pitched in and we got the chores done fairly quickly.  On the way through the city we tried to snap pictures of the "Green Bay Packer McDonalds" signs for dad - all of the McD's are green and gold in France rather than the red and gold that we are used to in the states so we referred to them as the Green Bay Packer McDonalds :). Andrew drove us home like a pro, we had some dinner (I don't remember what it was though :( ), unpacked and got ready for bed, we may have even watched an episode of "Bones".

Monday was a "ladies day" - Mom, Mrs. Eberhart and I went to Sete (one of my favorite spots) to walk along the pier, see the lighthouse, the old cemetary, the cute seaside town, have a little lunch and enjoy some beach time.  The sun was shining, the sky was bluer than blue - it was a lovely, lovely, wonderful day to visit the sea! We took a lot of pictures and mom and Mrs. Eberhart even held a sailboat in the palm of their hands :)  We enjoyed a little shopping and bought a few souveniers before lunch which was eaten at an outside cafe across the street from the canal and  included some Fois Gras pate with bread, salads and.... of course, a beer. A musician was playing along the sidewalk so we even had entertainment for a few minutes.  The fishing boats docked along the canal were huge with their nets wound up and ready for their next trip.

After our visit to the town and pier, we piled back into Mo Mo and drove out to the beach with our blanket.  The parking spot that we had found on our first visit to Sete was open so parking wasn't a problem and we walked down near the water, spread the blanket and began wading in the very shallow water.  Soon I realized that since our first trip to Sete, an area of beach that had been there before, was covered with water making it impossible to reach the rock wall that Adam and Nathan had climbed on previously, without swimming - the rock wall was completely surrounded by water!  It didn't take us long to realize why, however.  Soon, a parade of small sailboats emerged from the far side of the beachy area that we were wading in - it was a sailing school for small children!  In each little boat was a child and an instructor - very cute!  They headed out to sea, around the rock wall and eventually came around the far end and back into the beachy cove.  It made sense to us - if you live by the sea, the kids need to learn how to sail!

While wading in the beautiful clear water, we found several critters similar to those that we found on our first trip and picked them up to watch them wiggle.  A mom and her 2 year old daughter were having fun splashing and giggling nearby - I wondered if the little girl had found any critters while she sat in the water.  After awhile of relaxing it was time to get back into Mo Mo and head home.  It had been a beautiful, relaxing day in the sun.
Posted by La Famille Burns at 6:43 PM