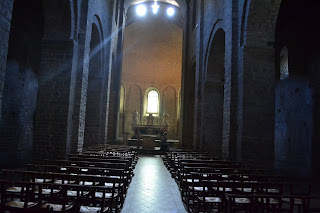 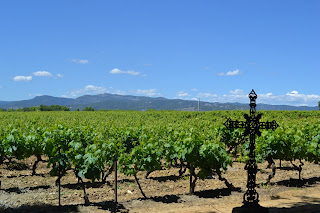 The abbey of Saint-Guilhem-le-Desert in the Gellone valley (30 kilometers northwest of Montpellier) owes its name to Guilhem, a French knight of the medieval period. Born sometime in the late 8th century, Guilhem was the grandson of Charles Martel, the Duke of Aquitane, and one of the Emperor Charlemagne's chosen knights. He fought bravely against the Saracens (Muslims) of Spain and became famous as the hero of medieval ballads due to his knightly prowess and chivalrous character. A devout Christian who ended his days (died 812 AD) in the monastery at Gellone, he endowed the abbey with a relic of the True Cross, given to him by Charlemagne. Because of this relic, the monastery soon prospered and became an important place of pilgrimage in southern France (from web site: Places of Peace & Power)

The last day of Mom and Mrs. Eberhart's visit was another beautiful southern France kind of day - the sun was shining, the skies were bluer than blue and the temperature was lovely.  Getting to St. Guillhem le Desert wasn't as difficult as I had feared it would be (we had to exit Montpellier from the other side, the side that I was not very familiar with!) and we made it with no problems.  We even found a convenient parking place to park Mo Mo so we were off to a good start.  The town was fairly quiet when we arrived, with the exception of a middle school aged school group probably on a field trip as they carried papers and pencils to make notes of significant findings during their tour of this historic town.  Our first stop, as always, was the Office of Tourism where we picked up some brochures and information about the Abbey located through the city and at the top of the windy streets.

Of course, being the ladies that we are, we had to use the "facilities" before venturing up to the Abbey so, lucky for us, Tracey and I had found them once before and I knew exactly where to go!  When I showed Mom and Mrs. E the potties I said "sure they're outside (in a gorgeous garden), and non-gender specific but they don't smell and accomplish our goal!"  I believe that we all used them and felt much better for doing so!  And then began our walk through the beautiful, quaint cobblestone streets, lined with potted flowers and plants.  Some of the shops were beginning to show signs of life and we were hoping that they would all be open by the time we came back through after our visit to the Abbey.

The Abbey's grounds included a vegetable garden and grape vines which were all very well cared for and manicured, under the very blue French sky, it was a lovely picture! After we explored the inside of the Chapel, we exited into a fairly large courtyard where a fresh vegetable market was open.  I purchased some veggies for dinner and then it was time to find out if the other stores in town were open.  We were delighted to find that some were (many were not yet --- and it was almost noon! - The French people sure know how to relax and enjoy life!)  A lot of time was spent in a lovely purse shoppe with wonderful purses of every shape, fabric, color and style - the sales lady was informative and very nice.  Our next stop was a jewlery shoppe which specialized in wire jewlery - very pretty!  We also enjoyed looking and tasting our way through a store specializing in dips, an artist's gallery/studio and a soap/lotion store.  We wrapped up our visit with a nice lunch outside next to the gorge which borders the town.

On the way home, we tried to stop at a winery, the dog was there, barked as usual, but nobody was home so we got to enjoy the beautiful grounds but didn't get to taste any wine.

The trip home was uneventful until, of course, we reached the exits for Montpellier!  There are four exits and I didn't know which one to take from this direction so we decided to wing it!  We got off, began driving and found the Tram tracks! We were able to follow the tram line until we found familiar surroundings and made it home safe and sound.
Posted by La Famille Burns at 3:44 AM