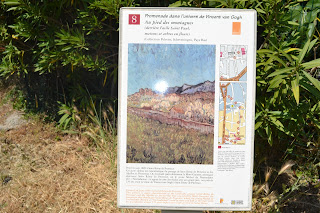 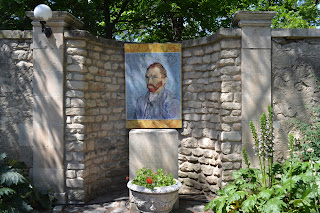 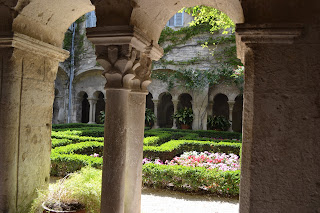 Vincent Van Gogh convalesced for a year (1889) at the asylum of St. Paul de Mausole which is near St. Remy.  After seeing so many of Van Gogh's paintings while we were in France, and even before going, Andy and I wanted to visit a place where Van Gogh had spent some time.  He had also lived in Arles, one of our favorite places, where he invited Paul Gauguin, whom he met in Paris, to join him to paint in his "Studio of the South".  After a couple months of painting together, the two painters began to have violent disagreements, during which, at one point, Van Gogh threatened Gauguin with a razor. The same night, Van Gogh cut off a part of his own ear. It was after this that Van Gogh went to the hospital in St. Remy working between repeated spells of madness.

The town of St. Remy has created a walking path, lined with paintings that Van Gogh created during his stay there depicting many of the same landscapes that we enjoyed along our walk.  The Hospital was interesting yet eerie to walk through, knowing the history of Van Gogh's madness.  Once again, I was in awe of the fact that we were walking in the footsteps of someone who lived so many many years ago.

Overall, our visit to St. Remy was beautiful, educational (Hot!), and peaceful.  The kids stayed home and Andy and I enjoyed some time exploring by ourselves.
Posted by La Famille Burns at 7:22 PM