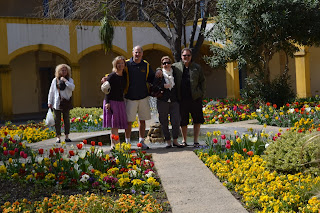 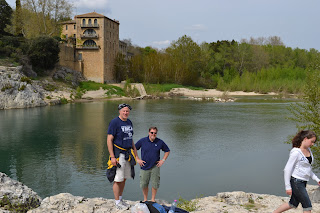 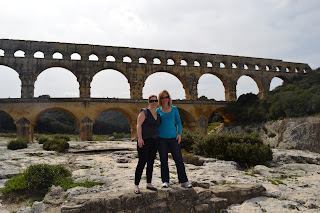 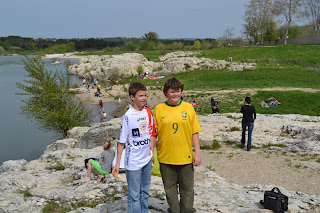 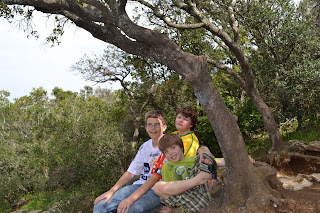 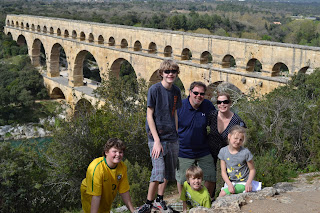 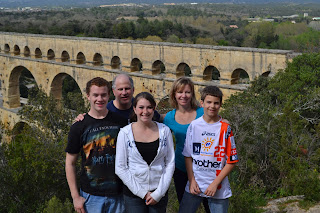 I realized while the pictures were uploading to the bolg, that Katie's face was the last one that I had seen before departing the United States of America in January and her's was the first American friend face I saw here in France - very nice!

The Wolff family arrived about 3 hours late on Thursday March 31 due to their initiation into understanding  European map reading vs. freeway directions!  Kevin drove from Rome, Italy while Katie navigated -- she did her best, and believe me, I understood her frustration when she called to report that there are no "north, south, east or west" labels on the road signs!  In the end, they enjoyed a 90 minute tour of countryside that they would otherwise, not have seen (and a 90 minute tour to get back to the right path).
The original arrival time was slated for 8:00 or 9:00 pm - we found the huge Wolff bus hidden among all of the semi trucks at a rest stop at a little after midnight - with four cute faces peering out of the back windows.
Although Katie and Kevin had a reservation at the Holiday Inn at the heart of the historic area, the trams stopped running at 1:00 am so by the time we got them to our house to park the bus and unload, it was too late to go to the hotel (and we were NOT going to try to drive them there!).  We all piled onto couches, beds, air mattresses etc... and got a decent night sleep.

In the morning, Andrew went to work while the rest of us leisurely woke up.  Emma and several of the kids went to buy fresh croissants for breakfast while Katie and I wondered through the garden with our coffee - Katie identified several of the flowers and bushes for me - the big purple flowers climbing up the terrace - Wisteria!  She's going to look for some at home :)  Kevin joined us for a few minutes and met Mr. Boisson along the way. Later, we packed up the adult suitcases and I trammed them to their hotel where they checked into their beautiful room overlooking the pool and palm trees.  We agreed to meet at the carousel at 1:00 for a tour of the historic district.  By this time, Nathan was at school (Adam and Emma skipped on Friday) and the other kids had run, with tram tix in hand, to the tram and ultimately, to Place De La Comedie to explore.

At 1:00 - we all met at the carousel, however, poor little Marcus had a tummy ache and was taken back to the mom and dad Wolff room to rest for awhile.  The rest of us headed for a sandwich stand, purchased some lunch and sat in the sun to eat.  Then we explored the rest of the city for the afternoon.  Andy and I enjoyed showing everyone around and were happy to have a sunny day in which to do it.  Nathan and Arthur became the family photographers on Friday during the tour and both did a great job!  After several hours, the Wolff parents went to their room to check on Marcus, regroup and planned to be at our house for dinner.  Andrew and I came home to the rest of the kids and began dinner. We had a nice relaxing visit, Marcus fell asleep on the couch, where he stayed for the rest of the night. The little guy slept soundly until the other kids woke him up in the morning - and he seemed much better.

On Saturday, we headed for the Arles Market where we shopped around, bought baskets and spices and enough food for a picnic on the beach.  We also went to the Van Gogh garden where the kids played and we snapped more pictures.  Afterward, we headed to the beach in the Camargue region.  This is the region that is known for black bulls, white horses and the Guardians (cowboys).  It is also where we see a lot of pink flamingos which, of course, we stopped to watch for a few minutes - the shrimp must be more available to them now as the flamingos are a brighter pink color than when we originally saw them a couple of months ago.

The beach that afternoon was frigid.  While we drove to Sts. Maries De Le Mer from Arles, the clouds and the wind came rolling in.  By the time we unpacked our lovely baskets filled with food from the car, the temperature had dropped and it was cold!  We did not let that stop us though - Kevin led the way to a nice sandy spot behind a barrier where the wind was blocked - we unpacked the food bit by bit - did not spread it out for fear of sand being blown into it, and enjoyed chicken, cheese, sausage, bread, olives, fruit and pastries!  Arthur and Nathan did a fantastic job with the fruit and pastry purchases! From lunch, we wondered down the beach to a rocky "pier" where the kids played in the water (up to their knees - except for Addie who did a belly flop right into the sea - from the sand, not the rocky pier!).  All of the kids were cold and wet - and having a blast!  The wind surfers had a fantastic day for their sport and we enjoyed watching them as well!  After a while on this end of the beach, we agreed that the time had come to pack it up and head to the other end for ice cream - which we did, but only after Addie found the cutest pink french dress to replace her soaking wet pink leggings! Adorable!

After ice cream and wondering along the other end of the beach we climbed back into the vehicles and headed for home with every intention to stop at several wineries on our way home. Ironically we could only find one open - strange!  The wine was o.k. - Kevin and Katie bought a bottle of the Merlot which we all liked and enjoyed on Sunday evening.  The winery itself, Domaine De Montcalm (http://www.domainedemontcalm.fr/) seemed very different than the others that Andrew and I have visited.  There seemed to be farmhands living on the grounds.  We passed a row of living units on the way to the tasting room and noticed several children peering at us through the curtains on the door.  Andrew and I had never seen that before.

Our last stop was Aiges Mortes - the midievil walled city.  Upon entry to the city, we found a pizza shop that was open and we were able to order 4 pizzas for the kids' dinner since the adults were going out.  The walk around the city was nice, the pizza's were done at 7:00 and we were heading home.  The adult dinner was going to be in true French style - LATE!  Thanks to the Holiday Inn, Kevin was able to find a restaurant that could get us in since I was unable to reach the one recommended to me to make a reservation.  (strange - I tried a couple of times and Nathan tried numerous times to call - we only got an answering machine!)

The kids watched a new movie delivered by the Wolff family: "Unaccompanied Minors", and ate their pizzas while the adults went to dinner at Plaisirs des Mets (http://www.oplaisirsdesmets.fr/), a sweet french restaurant down one of the lanes in the historic district.  We were greeted by a waitress who spoke very little english, seated outside on the front patio and handed menus to translate on our own.  I meant to bring our French/English dictionary along for just such a situation but had forgotten at the last minute (figures!).  When we asked to see the wine list, a kind gentleman who must have been in charge of the beverage options, stopped by our table to ask if we were interested in blanc or rouge vins - to which we replied "rouge s'il vous plait".  The nice gentleman disappeared and returned after a minute lugging two large chalkboards (about 4.5 ft high and 2.5 ft wide) to our table, propped them up against something and left. Kevin, Katie, Andrew and I looked at each other and laughed!  After perusing the prices of the wines which ranged from 19 euros to 140 euros + - we settled on a 29 euro bottle that the waiter suggested - good choice, we all liked it!

Between the waitress's broken english and our broken french, we were able to decipher enough of the menu to place our order.  Katie, Andrew and I tried the scallops while Kevin had the lamb - I think everyone enjoyed their meals, the wine, the entertainment that was provided by the waiters and waitresses (trying to talk with us), but most of all, the quiet relaxation and visiting with friends.  After dinner (close to midnight), we walked back to the center of the town and said  "bonne nuit".  Katie and Kevin walked back to their hotel while Andrew and I got on the tram and headed home where all of the kids, except for Addie, were still awake and playing.  We told them to go to sleep and headed for bed ourselves.

I believe we headed out Sunday morning around 10:30 and took the Wolff clan to see the beautiful Pont Du Gard -  built 2000 years ago by the Romans who prided themselves on the160 foot bridge being the tallest they'd ever built.  The purpose of the construction of the Pont Du Gard at that time was to deliver water to the city of Nimes, today it is an awesome site to see.  The Wolffs purchased enough sandwiches and chips for all of us to eat some lunch on the rocks beneath the bridge while enjoying a beautiful sunny day along the river.  Although all of the kids were disappointed that the adults would not allow them to go swimming, as other kids were doing, they had fun running around the rocks, up the hill to the top of the bridge, along the river and trying to spear fish with bamboo poles that they found along the way.  The adults enjoyed the whole scene.  We returned home that evening, enjoyed our last dinner together along with the bottle of wine purchased on Saturday and the Italian wine that Katie and Kevin brought from Rome and planned for their departure on Monday morning. Andrew made a point, on Monday morning, to take a picture with Addie and Marcus so he could send them, via e-mail, to their teachers back home - very cute!

We made the most of every minute that we could and truly appreciated the Wolff pack's effort to come and visit us.  The kids (and the adults!) needed to see some familiar faces that they could communicate and have fun with and the Wolffs provided exactly that (along with deoderant from home, mac & cheese and other requested American items)!  We were all sad to see them go and are looking forward to hearing about their adventures in Florence Italy and their trip home.

Our next visitors arrive next Sunday night --- Tracie, Koby and Eli!!
Posted by La Famille Burns at 12:05 PM