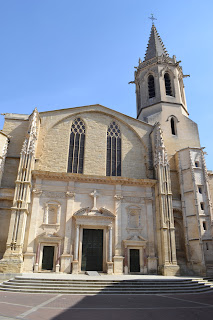 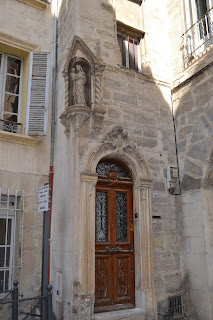 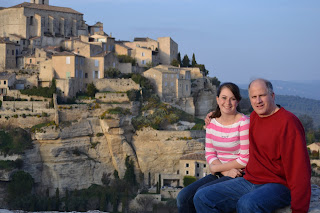 Emma and Adm completed their second week at their new school - College Aiguelleres and are doing alright - not great yet, but alright.  The difficulty at this school is that everyone is from different countries and are trying to learn French so nobody can really "chat" with each other - at least not until they have enough French under their belts!  The program is affiliated with the connecting public school so after the eight weeks of French, they are integrated into that school. I'm not sure if I wrote about the other girls in the class "petting" Emma's hair or not, but an 11 year old Yugoslavian girl started it on the first day and it has caught on - Emma deals with it, thinks it's strange, but at least it's a way to interact with the others.  Adam is slowly starting to interact with people as well - he's been teaching the art of thumb wrestling!  No talking involved!

On Friday, Andrew, Nathan, and I met with Nathan's new teacher at Lycee Pierre Mendes which is located at the end of the tram line, through the mall, across the bridge and down the sidewalk - it's about a 45 min. commute for him - easy, but long and he doesn't seem to mind.  His teacher was very nice, all business, spoke to Nathan in French (probably to gauge his abilities) and discussed the classes with us.  She was prepared with all of the necessary paperwork, as was I - passport - check, photo - check, Immunization record - check, Verification of residence - check!  She was pretty impressed (remember, we've been through this three other times already!). The school is large and very modern - white and metal and very open.  Changing classes requires going outside in the sunshine - lucky students!  Nathan seemed ready to start, which he did on Monday and had a great day!  He is primarily taking French classes and is thrilled about that - he is hoping to come home and be able to surf right into French 5 at Hoover!

On Friday evening we had dinner, watched an episode or two of "Bones", our new favorite family show thanks to Nathan and hit the sack because we had all agreed to be up and out of the house by 10:00 am on our way to Carpentras etc... in the Provence region.

Saturday mornings awakening went off without a hitch - no grumpy kids, everyone was ready and seemed happy.  If it hadn't been for me forgetting to turn off the coffee maker, we would have been out of town by 10:15!  Instead, we were on the highway by 10:30 and had stopped to get gas.

Carpentras looked like a very sweet, quaint little town but turned out to be very frustrating to maneuver on foot.  We began, as always, at the Office of Tourism.  I realized on this trip that every town we've visited has an office of Tourism - in the States, I don't think that's true - I'm not sure what we would do without these wonderful information centers - they seem to always (with the exception of one) be open, friendly and helpful and I really appreciate them!  We were given a map which included a walking tour of the town and headed out to eat.  Carpentras is about 1.5 hours from our house so by the time we arrived, everyone was hungry for lunch.  We found a nice little restaurant next to the Office of Tourism which served Chinese, Vietnamese and Thai food - lunch!  Adam ordered the chinese ravioli which ended up being fried ravioli and enough for an appetizer - he made due by chowing down more of the little rice cake jobs that you see in the photos above!  Everyone else seemed to enjoy their lunches, we finished and used the "facilities" as to try and avoid any space shuttle experiences (see previous blog posts), re-parked the car, and began our walking tour.

Now, I do love the office of tourisms as I've said above, however, the map that we were given in Carpentras, neglected to list about 80% of the streets in the town so reading the map, and following the map were two totally different things and we found it very useless!  We did see a few of the important landmarks that you see above but we had such a hard time that after about an hour of wandering, we treated ourselves to some pastries, jumped back in the car and said "au revoir" to Carpentras!

The next stop was Fountaine de Vaucluse which is home to the most powerful spring in France, gushing at up to 19,800 gallons of water per second from an underground river at the foot of a cliff.  The water powers the Moulin a Papier Vallis Clausa papermill which produces handmade paper (we looked, we touched, but we didn't buy).  The river and the spring were beautiful as was the cliffs/hill/mountain that surrounded a good portion of the town.  As we walked across the bridge and into the town (yes - there was an office of tourism!), we all jumped when a bunch of firecrackers went off just up the road!  We could see a lot of people and hear some music and later found out that there was a celebration similar to our halloween - people were dressed up and it was festive!  The spontaneous firecrackers were set off often, in various places and always caught us off guard!!  The river Sorgue, which comes from the spring, is calm in some places and white water in others.  We enjoyed watching Kayakers practice their sport, paddling down a water fall and through an obstacle course for quite a while. After taking many pictures of this beautiful little town, we decided to move on to Gordes/Village des Bories.

We found Village des Bories, which is just south of Gordes, first.  Bories are tiny beehive-shaped huts built of overlapping dry stones.  According to our handy dandy France book, this group of Bories was inhabited from the 16th to the early 20th century.  The small village consisted of Family living areas that included groups of bories made up of a main dwelling, an oven (seperate building), sheep pen, and wine cave/storage area and other miscellaneous buildings/rooms. The whole area was very interesting and like nothing I've ever seen before - I'm glad we stopped to take a look!

Just up the road and around the corner we had our breath taken away when we looked to the right and saw Gordes - you can see why in the pictures above!  The town is dominated by a 16th century chateau at the top and the rest of the town trickles down the hillside.  We did not go into the town, but did enjoy it quite a bit from the hilltop across the valley where we took our pictures!

Since our travel time home was 1.5 hours, we picked up a couple of baguettes at a boulangerie in a tiny little village and then drove for a while before pulling over to what would be our equivalent to a "rest stop" and got some sandwiches for dinner.

Sunday was very very rainy and overcast so we hung around the house, played games, and rested.  We are very excited for the Wolff pack to visit - they will be arriving on Thursday evening and staying through Monday morning - wahooo!  Our first visiters!