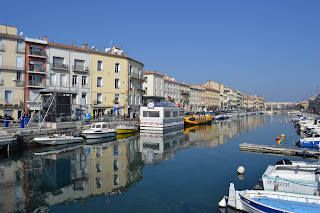 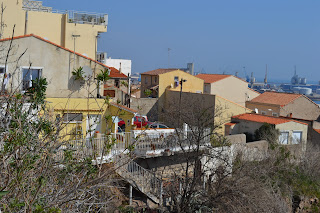 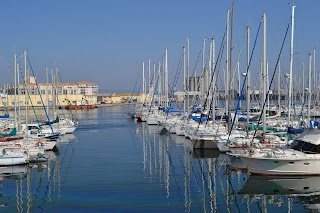 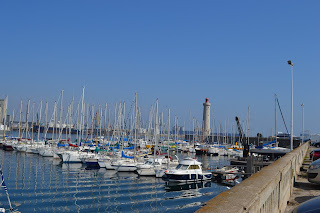 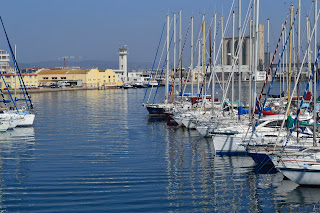 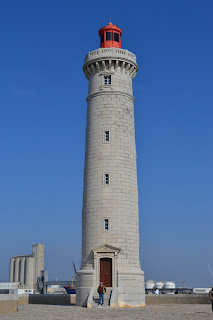 The outside of the shell 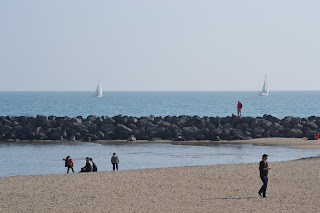 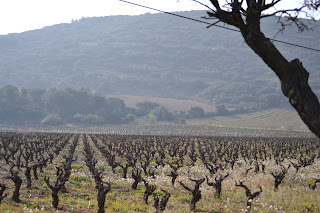 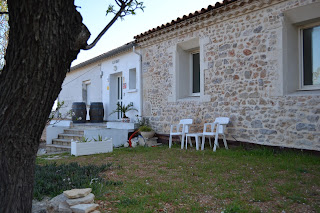 ﻿
Sete was fantastic!  It is a major fishing and industrial port in France.  The Grand Canal is surrounded by adorable little cafes, restarurants and shops that sell ships' lamps, propellers, fisherman type clothing etc...  Of course there are sailboats and fishing boats everywhere.  We were intrigued with the very large fishing boats which were piled high with fish nets, chains, bouys (sp??), anchors﻿.  I told Andy that I was reminded of the movie "The Perfect Storm".
We started at the Office of tourism after finally finding a place to park the car.  We retreived a couple of maps and pamphlets and were off!  We hiked up the hill to the middle (not quite the top) of the town where Cimetiere Marin (old cemetary) is located and where the famous poet Paul Valery, is buried.  We then headed down to walk along the Grand Canal and past all of the restaruants and cafes.  What a beautiful, sweet walk!  I enjoyed seeing the many people sitting at the seaside tables, enjoying their wine (yes - at 11:00 am!), and snacks - usually some type of fresh seafood.
Walking along the marina was relaxing and gorgeous as well, with all of the docked sailboats bobbing in the water waiting for the next ride out to sea.  We did see a couple of young guys getting one of the vessels ready for departure - masts up, sails out etc...  The lighthouse was very cool to look at and the view from that point was lovely - hazy, but lovely.  The kids enjoyed climbing on the rocks and finding a small part of sandy beach area -we spent about 20 - 30 minutes playing in that little patch of sand and enjoying the sun and sailboats.
On our way out, Adam decided to walk along the inside of the "wall" that seperated the rocky area from the sidewalk/parking lot - as he approached part of the wall that had an opening for him to climb through, I noticed that a couple of people were preparing to pose for a picture in that exact spot so I, in my very confident French accent said "Pardon, uno momento s'il vous plait" - to which Nathan said - "Mom, you just spoke 1/2 in French and 1/2 in Spanish" and after thinking about it, I realized that he was absolutely right!  So, we decided that I had just created my own language ---wait, no!  We'll call it Catalyn - that language that is spoken on the Spanish/French border that we've heard about!
After our little walk down the marina, we found a nice patisserie and purchased a couple of snacks to tide us over until our picnic lunch that we decided to eat at the beach - just up the road!
The lady at the Tourism office told us that there is a beach that is 8 kilometers long right up the street - we headed back to the Peugot, paid our parking, and headed for the beach.
The beach was very nice - much like the beaches at Sts. Maries del Mar where there were many "inlets" of sandy areas seperated by rocky terrain.  it's almost as if a group could set up shop in their own little private beach area.  After we enjoyed our picnic lunch of sandwiches, baguettes, cheeses, fruit and water, we strolled along the sand, climbed on the rocks, skipped rocks, wrote names and messages in the sand and found many sea creatures - some were still in their little sea houses (shells) and some were out in their birthday suits!  One BIG snail/slug whatever you call them, was sitting in the water when Emma said "hey look, it's a slug!" and Nathan, very smartly replied "yea, right Emma -- that's a stick", so, they tossed something at it and it started to move and Nathan jumped! Ha - guess it is alive - Emma laughed :)
Adam found the little guy above - he thought it was just a shell but when he looked inside, sure enough, the owner of that house was still occupying the space - Adam waited for him to emerge but didn't see any sign of him wanting to come out and play so, he put him in the shallow water and barricaded him with other shells.  As we continued to play -- Andy found another critter, much like Adams.  Very interesting shell with sharp points all around --- which leads me to the story below entitled:
POTENTIAL INVOLUNTARY CRITTER SLAUGHTER
AT LA PLAGE (THE BEACH)﻿
﻿
As Adam was playing barefooted on the rocks approximately 100 yards from the (almost) murder sight, Andrew found the cute little critter in the video above, picked him up, and announced, "Hey, here's another little guy like the one Adam found!" so we all began yelling for Adam because this guy was actually out of his shell and reaching around for something to grab onto! Andrew placed him on the sand so we could watch as he crawled around.  We enjoyed watching his little claws grab the sand and pull his shell along and commented how cute he was and how we should put him back in the water.  As Emma, Andy and I were all focused on our entertainment for the moment, off in the distance, a chase was brewing between the brothers.  Nathan had gone to get Adam and explain what dad had found.  All of a sudden I heard Emma exclaim "No! Adam! No!!!!!!" and I looked up to see Adam running at us and  just in time to see his foot come up and land directly on top of our new found friend!  Of course I began yelling at Adam that he'd just stepped on the critter and didn't pay attention to the fact that Adam was now jumping around holding his foot - oh yea, did I mention the pointy spikes coming from the shell - well, four of them ended up going into Adam's foot - one punctured the skin more than the others and there was blood streaming out of his foot.

We calmed Adam down and Andy kept watch over the critter to determine if it was a life or death situation - Nathan and Emma ran for Adam's shoes, socks and some papertowels from the picnic area and we got Adam's foot to stop bleeding. Miraculously, the critter actually started to move around and seemed to be alright!  We were all relieved as we placed him back into the sea and headed home.

On the trip home, we spied some more pink flamingos and stopped into Domain Del Mas Du Madame, a winery specializing in white, sweet, Muscat wines.  This entire region grows white grapes and focuses primarily on Muscat.  The first wine we tried was not a sweet muscat which suprised both of us as the only Muscat we've had (in California) was syrupy sweet.  We liked the first and tried two more which had hints of Mango, Lichie fruit and citrus.  Nathan chose the bottle that we purchased and we headed for home. This wine will have to wait for a nice hot sunny day!

The Boissons have their grandchildren staying with them for the week since all students in France are on winter break so we have six little people - 5 boys and 1 girl, all under 9 years old, running around the yard.  The best day was Monday morning when, at around 7:45 am - all of the kids were outside running and playing, laughing and screaming, running past Nathan and Adam's windows and having a great time --- all the while our three angels were trying to sleep!  Nathan was so excited that he got out of bed, opened the window and closed the shutters - he didn't seem to mind if the kids saw him doing so or what they thought - HE NEEDED TO SLEEP MORE!  I reminded him that he was that age once, loved to run around laughing and playing and probably kept a few people awake also.  The Boisson grandchildren are very cute - the little girl who is 9, Matilde, came over when we had Mrs. Boisson's keyboard (piano) and very politely said: "I'd like to play the piano please" - she came in, sat down, and played beautifully!  We couldn't chat with her much since she doesn't speak much more english than what she said but we did manage to play three games of UNO with her - colors and numbers, we did fine!

As for my French language classes - they are going well!  I have met several people in the class and enjoy visiting with them before and after class - we all take the same bus after the class is over so we talk about the classes and learn about each other.  The two girls I've chatted with most are from Australia and New Zealand - the New Zealand girl, whose name is Gillian, informs us about the recent earthquake and the progress of rebuilding Christchurch.  Her father happened to be in a business meeting on the top floor of an office building in Christchurch when the earthquake happened but the building held fast and he is fine.  There is a lot of damage to homes and to historical buildings that were built before people knew that there was a fault line running under Christchurch.  I've also become friends with a greek gentleman whose wife, from Conneticut arrived last week (I had coffee with her this morning - very nice!), a gentleman from Iran, one from Brazil, a girl from Thailand and others.  We have a very nice and friendly group and believe that we are learning a lot :)  We need to chat with other people though to practice our skills.

That's it for now!  Enjoy your weeks!  Bonne Journee! Au revoir!
Posted by La Famille Burns at 9:37 AM