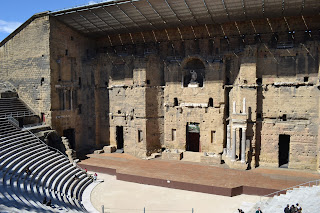 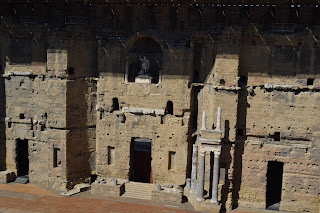 On Friday afternoon we received a call from Monsieur Didier Valery of the Espace Leopold Sedar Senghor to let me know that they have found a spot for Nathan at the Lycee!  Yea! Now we have to wait to hear from Nathan's new teacher about the location and the time for him to report to school - more waiting - ugh.  We received this call while Nathan and I were having a croissant, pain au chocolate and coffee at  a local boulangerie - yum!  Maybe I should go out and do that more often, the phone seems to ring when we leave the house :)  Emma and Adam are doing alright at school - I think that the education is better but the friend-making still isn't happening due to the language barrier again.  They asked if they can come home for lunch from now on, not because the food is bad, but because there is "nothing to do" for an hour.  We told them to use the time to try to communicate with the other kids standing around with "nothing to do" and threw the deck of UNO cards in Adam's backpack - they should all know their numbers and colors in French by now right??? That could be fun! - We'll see what happens.

Saturday morning started off similar to last week - we let the kids sleep as we headed for the Montpellier Market. We ended up with some dried fruit, new jelly (cherry and black raspberry), fresh bread, scallions, pears and apples. We were also given a lesson by a lady selling 100% mohair blankets on the difference between Mohair and Casmier - the Mohair blankets were beautiful and warm but we can't spend 165 euros on one right now so we just enjoyed the lesson, said our "mercis" and kept going.  About 3/4 of our way through the market Nathan showed up and joined us for the end of our shop.  I looked at the Madagascar basket booth again - we liked the polka dot baskets but they only came in REALLY large sizes and we need a medium so I will think about it all some more and go back soon.  It's just so hard to pass these baskets up for 10 - 12 euros!!

On our way home, Andrew decided to walk the whole way, Nathan and I took the basket of goodies and jumped on the tram.  Adam was up but Emma was still snoozing away and didn't wake up until late!  After she woke up, we ate some lunch and headed for Orange France, a destination listed on Adam's list that we had planned to do last weekend but due to the rain, postponed that idea.  Saturday was bright and sunny and very welcome after all of the rain we've had.

Orange was very nice - a friendly little town with colorful buildings and many cafes etc... We enjoyed seeing the old (duh!) Roman Theatre, from 1 AD - reign of Augustus,  which is one of only three theatres in the world that has maintained its original theatre wall measuring 120 ft. high and 338 ft. wide. The theatre continues to be used for performances & concerts today due to it's perfect accoustics.  The statue of Augustus Caesar is still housed in an alcove high and in the center of the theatre wall but was difficult to photograph due to the location of the sun while we were there - we got a lot of shadows. After looking all around the seating areas and hallways of the theatre, Andrew decided it would be fun to jump up on the stage and do some fancy moves (yes, there were other people there, listening to their audio tours and taking pix!), all three kids decided to join him in his antics as I photographed the whole event and then made them all jump down so our fellow tourists could enjoy their visit and photograph the theatre.  It was on our way out that we noticed the sign stating something like: "Please, for your safety, do not climb on the stage" - and it was in several languages -- including English, so we couldn't even play the "we don't speak/read French very well" card.  Big OOPS!

From the theatre we walked to the Triumphal Arch on the edge of town.  The arch was built around 20 AD and is elaborately decorated with battle scenes, military trophies and inscriptions of the glory of Tiberius.  I loved the ceiling which reminded me of a quilt pattern - the center ceiling (there are three arches in the monument as you can see above) remains in very good condition, the little arches on the sides seem to be fading somewhat.

After hangin at the Arch for about 15-20 min we walked back to town and on the way happened to pass a barber shop listing haircuts for 10 euros! Wahooo - the cheapest we've found them in Montpellier is 14 euros so in we went and got Adam in the chair - he was getting very shaggy - still cute, but shaggy.  The barber was a very nice gentleman from Avignon who had worked in a shop their until he bought this one in Orange and is now his own boss.  He spoke very good English and when we asked if he had been to America he replied "no, I learned all of my english from watching T.V.!"

Adam got a nice haircut, we met a very friendly Frenchman and were ready to continue our little exploration of Orange.  After realizing that we had probably done all there was to do in Orange, we treated ourselves to a little snack and jumped back in Mo Mo (we named the Peugot Mo Mo - I don't think I've mentioned that yet - she's been Mo Mo for a few weeks now) and headed for Chateauneuf-du-Pape, a little village nearby where in the 14th Centruy, the popes of Avignon built a new castle (chateau neuf).  They also planted vineyards from which one of the finest wines of the Cote du Rhone is produced.  During the Wars of Religion, the Chateau was destroyed for the most part and all that remaines of the papal fortress are a few fragments of walls and tower.

This area is known for the vineyards, numerous wineries and tasting opportunities - we were psyched!  The first winery we visited was Domaine Grand Veneur - Alain jaume & Fils.  The wines were alright - my favorite was the first one which was actually in a very cool bottle and, of course, the most expensive at 23 euros.  Andrew said he didn't care for any of them (three) so we bought the pretty bottled wine and left.  I feel so awkward when we go into these wineries, don't pay anything for the tastings and then don't buy any wine - I always feel like we need to purchase something. Sometimes I wish that we could just pay for the tasting so my guilt would be alleviated!

The next winery was a REAL letdown - the sign out front was pretty, the drive up to the tasting/selling area was gorgous, the buildings on the property were lovely, the directions to get to the tasting room were easy to follow - unfortunately, although the signs around said "Ouvert" (open) - none of the doors would budge - no matter how much we pushed and pulled them!!! So we looked around, took some pix and headed for Domaine De Saint Siffrein where the above photo of the vineyards and mountains was taken. Andrew asked if he was the owner/wine maker and he replied "yes" - he looked about 28 years old -- maybe!  When we asked how old the vineyards were he told us that the first vines were planted in 1880 and that he is the 5th generation to run the business.  He works the fields along with his father and a some folks that they hire during the busy parts of the year.  The winery itself was very simple and had a nice sense of history, family and ease.  We didn't love either of the wines there but, thanks to me and my obligatory nature, did purchase one bottle.

After that we headed for home as Andrew and I were invited to dinner at his boss's house (Veronique and Phillipe).  Another friend of their's, Hollie, who is a French professor at San Diego State University in California and is currently in Paris teaching French at a university there, would also be at dinner. We got home, Andrew napped for a few minutes while I had a snack and the kids scattered to their respective electrical devices.  We then got dressed and ready and picked up the phone to place a pizza order (there are 2 or 3 nearby pizza places).  I couldn't believe this - ALL of the pizza places were closed!  Andrew even walked to a couple of them to see if they were just too busy to answer the phone and came home to report that, sure enough, they were closed.  I, who had been a tad bit tired and grumpy all day finally blew - "WHO IN THE %$#$*@!! CLOSES A PIZZA PLACE, ON A SATURDAY NIGHT, IN A COLLEGE TOWN??!!" Now what??? I offered to drive the kids to the grocery store to pick out some frozen pizzas but time was closing in on that opportunity because we had to leave in time to get to Veronique's house by 8:00 - dinnertime!  The kids were very gracious (much more so than me!) and Emma said "Mom, just give me some money and I'll walk to Shoppi and find something for us" - bless Emma (and Adam who walked with her) and Nathan too for cooperating with everyone - they took care of everything so we could leave.  Andrew and I had a wonderful evening with Veronique, Phillipe, and Hollie - who is also in a Rock and Roll band in San Diego - she seems like a very bright and fun lady and we enjoyed getting to know her.  The dinner was amazing - asparagus, lamb, potatoes, salad, cheeses, bread and a wonderful apple tart and of course Wine!  We took a bottle and everyone enjoyed it with dinner.  When I finally looked at the clock after dessert - it was 12:00! Midnight!  OMG! We have to get home but we can't just eat and run - ummmmmmm - well, we helped clean up the table and made it home by about 12:50 - kids were still up and had watched two episodes of Bones :)  Sunday we were all going to be tired!
Posted by La Famille Burns at 12:29 PM