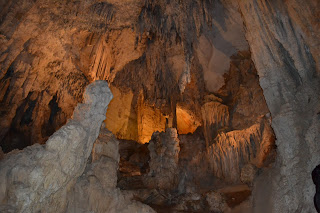 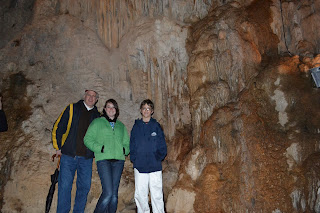 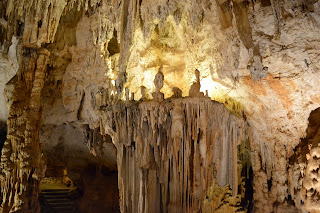 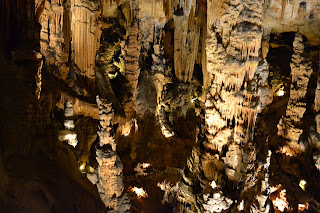 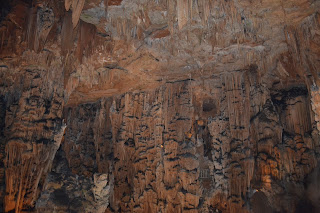 This was our most challenging weekend - it rained from Friday night through --- well, it's now Tuesday and it's still raining!  We did get a little break on Saturday morning when Andrew and I walked to the tram to go to the outdoor Montpellier market.

On Friday night we relaxed and watched a Bones episode.  I forgot to mention in Adam's birthday blog post that after bowling, we found a VERY LARGE bookstore which reminded me of a Borders and Joanne Etc.. combined - lots of books along with craft items.  We had a nice time browsing through the store and Nathan ended up using his birthday Euros from Nana to purchase the first four seasons of one of his favorite shows (and now becoming a favorite of the rest of the family): Bones.   Popcorn was popped, we all snuggled on the very uncomfortable couch in our family room and enjoyed watching Booth and Bones solve another murder.

The kids enjoyed sleeping in on Saturday while Andrew and I jumped out of bed, threw on some clothes and headed for the Montpellier outdoor market which is held down by the aquaducts.  We remembered to bring the basket that Mrs. Boisson has loaned us and were looking forward to finding some fresh stuff.  Upon our arrival, I noticed that the Basket booth with baskets from Madagascar wasn't there - I assume due to the impending rain, the smart market folks decided not to brave the elements - bummer for me, good for them!

All of the other booths seemed to be there and we enjoyed looking at the fresh fruits/veggies, cheeses, breads, herbs and spices (much different than the Arles market), fish, shellfish, flowers.  We spent a lot of time talking with the lady at the herb/spice booth learning about her business.  The herbs that she sells are primarily for medicinal purposes although she does have some pre-packaged curry and tumeric etc.. which we have purchased.  Mrs. Boisson had explained to me the first time I went to the market that if we tell the lady at this booth what our problem is, she will come up with an herbal remedy for us!  So - Andrew asked what she would suggest for his cholesterol (remember about 10 years ago when the doctor told him that his numbers might be getting a little close to the high range??? He has been very good about watching his cholesterol intake ever since!).  A mixture was explained, he had an option of three different ingredients to make it taste good (two were licorice flavors - anise and ???, and one was citrus -he chose citrus), the procedure for preparing the "soup" was explained and everything was packaged up.  I asked about my memory issues and was given a package that they have pre-mixed, along with instructions (mine seems to be more of a tea).  My mixture contains Melisse, anis vert, ginkobiloba, vervelne, hibiscus, ecorces citron, reglisse, basilic, rocibos vanilla (I copied this off of the package and can't read some of it well - it may even be partially in french).I tried mine the next day and liked it - Andrew has not tried his yet.

On the way home we decided to walk to the boucherie and pick up some meat - we came home with chicken breasts, ground turkey and pork chops. The rain started soon after we arrived home and the rest of our day was spent playing Parcheesie (sp?), cards, wrestling, skyping, computering, napping, being bored, getting on each other's nerves etc...

The rain was still pouring down on Sunday morning - I didn't even want to open the shutters but we feel like we are in a cave if we don't so I did and we watched the droplets hit the poolwater out the window.  Emma had suggested several times that we go to the other cave we had heard about so Andrew decided that it was time to get out of the house before we hurt each other and called Grotte Des Desmosielles to ask if they were open and what the tour schedule was. It turned out that an english speaking guide would lead a tour at 3:30 so we putzed around the house for a couple of hours until it was time to go at 2:10 or so - the trip was about 45 min. Nathan chose to stay home which was ok with us - I think he needed some alone time.

As you can see above, the caves were gorgeous!  Grotte De Clamouse, which we visited a few weeks ago was amazing in a different way - it was a "newer" area of caves and more crystalized or sparkly.  Grotte Des Desmoisels was much older and larger.  Some of the "rooms" we visited included: The Royal Room, named for the stalagtites hanging down in such a way that they looked like fabric robes; The "Dining Room" which is where you may be able to see the witch's face in the picture above; "The Cathedral" which is indescribeable - this room was massive - the size of a football stadium at 52 meters high (about 156 feet), 48 meters (about 144 feet) wide and 120 meters (360 feet) in length - full of stalagmites, stalagtites, columns, columns that, due to their weight - had collapsed into themselves, and many different colors from red, orange, blue, green, black, brown etc... - gorgeous!  One of the Stalagmites which sits on two platforms in the middle of the cathedral is known as the "Madonna with child" because it actually looks like Mary holding Jesus - very cool!  My camera battery had died by the time we saw her and Emma hasn't loaded her pix yet so I couldn't post it.

The legend of these caves tells the story of a young shepherd who, while looking for a lost sheep, fell into the cavern and upon awakening, claimed to have seen thousands of tiny fairies dancing around him.  He ran to the village to inform the people. (nobody knows how John got out of the cave!).

The first real tour of the caves was in the middle of the eighteenth century but were largely athletic and dangerous and lasted about 14 hours.  The caves were open to the larger public in 1931, after the creation of the tunnel in 1929 where the complete skeletal remains of a dinosaur were discovered.

Our day continued with a rainy ride home, checking out the flooding grape vine fields, overflowing rivers etc... we now are under a flood warning and the rain is supposed to continue through Wednesday night.  Sunday evening we enjoyed "On a Clear Day" a movie that Andrew's mom sent - it was slow at first but had a nice story/lesson in the end.

Monday began with the kids taking placement tests at, what we hope will be, their new school.  Emma and Adam started classes today (Tuesday) and Nathan will begin as soon as they find a spot for him at the Lycee (high school).  Although Emma and Adam seemed happy to go and take the tests yesterday and were happy afteward, when I got the call that they could begin today, the moods suddenly changed.  I am hoping that they are happy, make new friends, learn french and make the most of this new chapter in our trip!

My french class continues to go well and I've met people from all over - we have nice time together, laugh a lot and understand each other's frustrations.  I am, by far, the oldest person in the class and the only one who isn't working at the University or local research facility!  Several of the students are post doctoral students and I love hearing about their adventures!