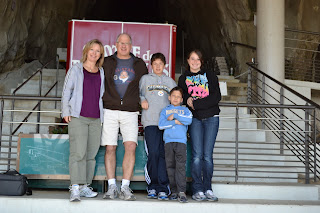 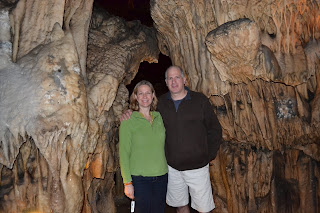 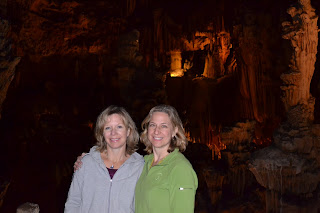 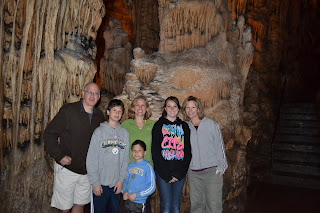 ﻿
On Thursday, Andrew took the day off to show Tracie, Koby and Eli Carcassone - the ancient walled city. Our kids went to school and I stayed home to catch up on things there.  The boys enjoyed most of their visit to Carcossone but I think it would have been much more fun for them if our kids had gone along.

On Friday, Emma took the day off of school and went to Grotte Des Desmoiselles with Tracie, the boys, Andrew and me.  The caves were very cool even on our second tour!  Koby and Eli enjoyed running around and hearing the stories about the caves, the shepherd who fell in and saw the little fairies, and playing the "instruments" in the "music room".  We were lucky enough to have the same tour guide, one who spoke some English and therefore, talked about each "room" in French and then followed with the English version.  He even remembered Andrew from our first time through!

After the caves, it was time for the adults to find some wineries and let Tracie taste some vin from France!
As we drove, we watched for signs mentioning  "degustiation" (tasting) and found one - after winding down a long narrow road, we found the winery, pulled in between the stone entrance and parked in a fairly deserted lot.  We got out of the car and headed to the door which was locked - closed up - not open!  Our trip down the long winding road, however, soon got very exciting .  In the near distance we heard a lot of..... bells???? Sure enough, an entire herd of sheep were heading straight for us and each of them had a bell around their neck (the kind that people use at high school football games :) ) -- I had never seen anything like that but had heard from my parents about the sheep and bells in Europe.  What a sight to see so many sheep sauntering across the field, across the street, through and around the winery, to another field and being prodded by a modern day shepherd in a tank top, baggy pants with his trusty dog to help!  The clang, clang, clang of the bells and the bahhhhhing of the sheep were fun to witness, we all laughed and enjoyed the event!

After leaving the deserted winery, we headed further down the long windy road to find out if there were any degustiation opportunities there - sure enough!  Around a couple of bends in the road, we saw signs and kept on driving.  We eventually came to a very old estate in the middle of vineyards - I walked in to see if it was open and was greeted by a very nice woman who said that she would get the winemaker and meet us in the tasting room.  We enjoyed the tastings and the visit with the women while the kids played outside and waited as patiently as they could.  After this degustiation, we headed for home, cooked up dinner and enjoyed the evening.
Posted by La Famille Burns at 9:49 AM