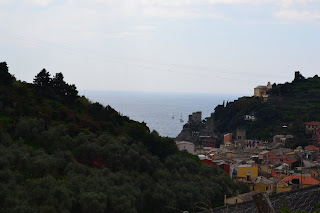 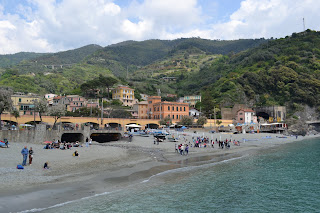 The route to Tuscany was, of course, beautiful!  As we drove I admired the landscape and was reminded of drawing mountains as a child. We used to draw arched line next to arched line to depict a mountainous area - well, that was Italy - mountain on top of mountain - gorgeous greenery all around with bright blue skies above and often, the mediterranean sea below. Upon several suggestions to visit Cinque Terre along the way, we headed in that direction.

The Cinque Terre are five small villages on the "Costa Ligure of Levante". The villages from north to south are: Monterosso al Mare, Vernazza, Corniglia, Manarola, and Riomaggiore.  In order to get to Monterosso (the first town on the northern tip), Mo Mo had to chug up and down the mountains, around hairpin curves, past little houses and restaurants tucked into the mountain, past vineyards, olive tree groves, lemon trees and a lot of "middle of nowhere on the mountain" areas.  We didn't know if we would ever truly arrive in Monterosso but continued to follow the narrow road and the signs claiming that we were indeed heading in the correct direction.

Finally, we did in fact, arrive in Monterosso -- along with many many other people and their cars!  As we drove closer to the village, the roadsides were more and more populated with parked cars.  We saw a parking garage and actually pulled into the drive to the gate before we noticed that it was closed/full.  Andy did a great job of backing out of the drive and into the road before any other cars came whipping around the sharp corner at the end of the drive.  He let us out and chugged back up the mountain with Mo Mo in search of a parking spot.  He soon returned and pointed straight up the side of the mountain where he left our hearty little car.

We enjoyed walking around Monterosso - a charming little village on the sea with tourist shops, restaurants and a lovely view.  Lunch was eaten in a tunnel due to a short rain shower which passed through, a couple of souvenirs were purchased and pictures were taken before making the decision to board the train and tour around another village in the Cinque Terre chain.  We decided to visit Coniglia, bought the tickets, boarded the train, arrived in Coniglia and started walking toward the village when we realized that the village would take 20 - 30 minutes to walk to!  We didn't have that kind of time since we still had hours to drive to Tuscany. We all did an "about face" and went back to wait for the next train that would return us to Monterosso where we enjoyed walking through through some more streets and headed up the mountain toward Mo Mo.  Emma and I brought up the rear huffing and puffing up the hill and stopped to enjoy rows of lemon trees and a few other interesting sights along the way - cacti, fun bumper stickers and tiny town maintenance vehicles :)

Pisa was our next stop and actually had more to offer than just the leaning tower.  The following came from the tourism sight for Pisa and explains the buildings very well:

In the north-west of Pisa there is an immense green lawn on which four impressive buildings stand, in gleaming white marble. These imposing structures are the enormous, breathtaking Duomo (cathedral) - built almost 1,000 years ago, the cathedral's bell tower - better known as the Leaning Tower of Pisa, the circular Battistero (Baptistery) - the largest of its kind in the whole of Italy, and the Camposanto - also known as the Holy Field, without doubt one of the most beautiful cemeteries in the world. This area is referred to as the Campo dei Miracoli or the Piazza dei Miracoli (Field of Miracles) and these remarkable Tuscan buildings combine Moorish, Gothic and Romanesque architectural features.

Upon a suggestion by our good friends, the Wolff family, we actually purchased tickets to climb to the top of the leaning tower - not cheap but well worth it!  The stairwell to the top of the tower is narrow, the stairs are well worn and leaning along with the tower, and the little openings along the way add to the excitement and anticipation of finally reaching the top.  We spent approximately an hour at the top looking around, enjoying the view and snapping pictures.

Nathan attempted to enter the cathedral for a tour but found that it had closed for the day.  From the souvenir shop Adam bought himself a 5 inch statue of the leaning tower, I bought a new Rosary and Emma purchased a spoon for a friend who collects them.

Dinner consisted of pizza at a little restaurant with a nice view of the tower and a scoop of iced cream for dessert (it was NOT gelato!).  Back to Mo Mo for another hour to reach our destination in Tuscany in Fattoria Sant' Appiano.

I decided that it would be a good idea to call our "hotel" to let them know that we would be arriving late and received the wonderful news that we were supposed to be there by 8:00 pm (which wasn't going to happen since it was already 8:45!).  The lady on the phone wished us luck finding the place in the dark and said that she would wait in the office for us.  Andy drove as fast as he could (which may have resulted in the speeding ticket that we received in the mail soon after our arrival back to Montpellier) and we were able to get close! In the end we did have to call for help which she provided nicely and we arrived at our nice Tuscany home around 10:00 pm.
Posted by La Famille Burns at 1:58 PM