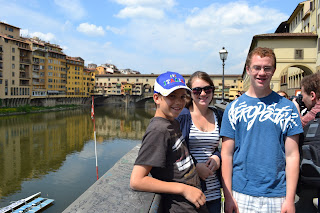 Since it was dark outside when we arrived in Tuscany, we had not seen the view that welcomed us on Thursday night.  After a long day of sight seeing, getting lost and then finally finding S'ant Appiano, we were driven from the office, to our apartment and went to bed. Our apartment was very sweet - two large bedrooms with armoirs, a bathroom, kitchen and dining area with fireplace.  Although there was a television in this apartment, we did not turn it on.  The wooden french doors that led outside from the dining area looked out over the vineyards and blue skies in the morning.  When we woke up, Andrew and I walked outside to discover the beauty of Tuscany that surrounded us.  Vineyards, hills and valleys, and a quaint little town on a hill that was Fattoria S'ant Appiano.  Andrew walked over to the main office and talked with the owner and her daughter on Friday morning to get the information that we would need to get to Florence (The daughter who helped run the business was fairly easy to talk with and very nice - Andy and the mom, who spoke no English at all, hit it off well and formed some kind of bond!).  The kids woke up earlier than they would have liked since we had reserved tickets to the Uffizi Museum, and we all prepared for the day.  We made it to Florence with no problem but had to stop at a gas station to ask where to park!  We found a great place on the edge of the old town, left Mo Mo and went to find the Office of tourism and explore the Renaissance city of Florence.

The office of tourism in Florence (or at least one of them) was hidden behind the square where the Basilica of Santa Croce (Basilica of the Holy Cross) is located.  The Basilica is the principal Franciscan Church in Florence and the largest Franciscan church in the world. This church is where such famous Italians as Michelangelo and Galileo are buried.  Andrew and I had the kids take our picture in front of this church because it was a roman catholic church with a star of David prominently displayed on the front wall. After some research, I discovered the following:

The campanile was built in 1842, replacing an earlier one damaged by lightning. The neo-Gothic marble façade, by Nicolò Matas, dates from 1857-1863.
A Jewish architect Niccolo Matas from Ancona, designed the church's 19th century neo-Gothic facade, working a prominent Star of David into the composition. Matas had wanted to be buried with his peers but because he was Jewish, he was buried under the porch and not within the walls.

After gathering some information and a few maps from the O.O.T., we headed to the world famous Uffizi Gallery to check out the famous artworks that have been gathered overtime. The Uffizi was undergoing a lot of renovations and as a result it was difficult to appreciate the outside of the building.  I wasn't sure what to expect since I did not do my research before our travels.  Unfortunately, Emma and Adam, having been introduced to nude artwork on a field trip with their school to the Musee Fabre in Montpellier, determined after 5 minutes that they were NOT interested in seeing more "naked people".   In the end, I had to agree with them.  Maybe it's because we just aren't "cultured" kind of folks or just very modest, but the numerous nude male statues lining the halls of the Uffizi caused me to keep my head down for most of my visit!

I did enjoy a lot of the religious paintings and found them especially moving since we had just celebrated Easter and Passover but I think that Andrew and I learned during our visit that Iimpressionism is more of our style overall.  Nathan was the biggest trooper of the kids - Emma and Adam left the Gallery after approximately 20 minutes and agreed to meet us outside at a specific time, Nathan stuck with Andrew and me for about an hour and even stole a photo of one of the sculptures (no photos allowed!).

We enjoyed seeing the Arno river which flows through Florence and divides the north and south sides of the city, and the love padlocks that are hanging on a railing between the Arno and the Uffizi. Legend has it that when a person hangs a lock on the railing (or on other places nearby), after writing their "true love's" name on it, and throws the key into the Arno, their love will last forever!  Sidenote: after a week the railing is so full of padlocks that they are cut off and thrown away - what THAT does to the true love is unknown!

The streets around Florence are so inviting!  Filled with Gelato shops, jewlery stores (no, I didn't get any jewlery - BIG bummer!) and around several corners we were dumped into little "squares" containing markets which sold not only souvenirs but leather goods as well. Upon a recommendation from the Plakas family, who has been to Italy many times and is planning a wedding in Florence in June, we had our first Italian Gelato at Perche No! and it was fantastic!   Emma and I had a fun time looking at the purses and wallets at several stands.  In the end, Emma and I bought leather purses, Adam and Andy got "Messi" soccer jerseys (famous Barcelona football player) and Nathan took home a t-shirt. While we ate lunch, Emma suggested switching from our old purses to our newly purchased fancy Italian leather purses, however, since it looked like rain was coming our way, I discouraged it.  (In retrospect, however, it probably would have been a smart idea since my new purse had a zipper on the top and my old one only had a ribbon to tie the top closed).

We enjoyed looking around the numerous squares and had fun checking out a lot of the sculptures in the Piazza della Signoria where there is a replica of the "David" along with Titan and many others.  I was sort of fascinated by the sculpture above depicting the beheading of someone - I need to look that up and figure out the significance of it!

Andy wanted to make his way to the museum where the original "David" is housed and found out from someone we talked with on the street that the line was 2 hours long.  That didn't stop him, however, he at least wanted to see the outside of the building!  After wondering around the outside of the Duomo Cathedral which is the third largest cathedral in the world, took six centuries to build and is dedicated to St. Mary of the Flower (and also had a two hour line to get into), Andy seperated from the family and we agreed to meet about 30 minutes later in the Piazza della Signoria.

The kids and I began walking back toward the Piazza and stopped in the square where we had purchased our souvenirs so that I could buy a cute blue scarf - it really is very pretty with little flowers on it -- that was the last time I saw the wallet that had traveled from the states with me.

After parading through the streets for awhile enjoying the people, the views and the experience of Florence Italy, we met up with Andy just as the rain began to fall.  For cover, we decided that it was time for another gelato and headed to the closest gelateria for our second cone of the day which we ate undercover, huddled with many others, at the opening of the Ponte Vecchio before crossing back over.

Although it was a little early for dinner, I was interested in finding a restaurant that was also recommended by Mrs. Plakas in order to see the church where the wedding is to be held in June which happens to be across the street from the restaurant.  We found both with no problem - it will be a beautiful wedding I'm sure!

In preparation to pay the parking ticket before our departure from Florence, I opened my purse to retrieve my wallet and discovered that it was no longer in my purse - I had become a victim of the Florence pick-pocketers that we were warned so much about!  After thinking about what I had lost, I realized that my only serious concerns were my French bank card and my Citi Bank Mastercard from home.  I can replace my Ohio drivers' license, insurance card, pix of the kids etc... and there were only 12 euros in the wallet.  Thankfully, upon our arrival to France, I had taken all store credit cards etc.. out and put them in my nightstand along with my American money - whew!  We tried to find a police officer or police station to report the loss but had no luck so headed back to our apartment.

Our hostess at the apartment helped us call the local police station who said that there really isn't anything that we can do - a  police report wasn't necessary.  So, we were able to call the credit card company to block the card and order a new one (which arrived Monday morning!).  I cancelled my french card on Monday because they were closed on the weekend.  Later, we found out that the criminals had, in fact, tried to purchase quite a bit of sporting good equipment - $1,005.00 worth but Citi Bank blocked the charge!

We did not let the lost wallet dampen our visit to Florence - it was wonderful, the weather was very nice overall, the gelato was fantastic, and the sights were beautiful!
Posted by La Famille Burns at 1:13 PM