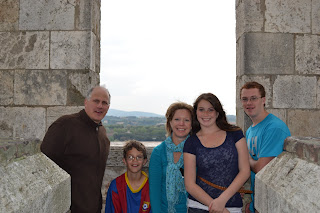 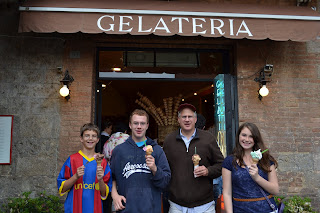 Saturday began with a cooking class for Nathan and me with an Italian chef.  The idea came from the literature about our apartment/hotel, that offered the cooking class, however, when we inquired about signing up for it, we were told that the chef was in the hospital and not able to teach at that time.  Another chef at a local restaurant located close to the apartment was recommended as a substitute so we signed up with her.

Andy drove us to the restaurant, which actually turned out to be an Inn for people or groups of people who came for various retreats or conferences ie: Yoga, spritual meditation, etc... - it was a wonderful location for those typed of groups and the Inn was aged, stone, quaint and, of course, surrounded by vineyards and a garden from which the vegetables and herbs that are used for cooking, are grown.

Nathan and I learned how to make homemade saffron fettuccine with zucchini and cherry tomatoes, Savoury chicken with herbs and olives and a chocolate cake from scratch.  We also received a couple more recipes that were not made that day.  Although Rosanna Passione (the chef/teacher), was very nice and taught us delicious recipes, we were disappointed overall with the class because we were not involved with the cooking at all.  The two of us were the only students and we just stood in the kitchen and watched Ms. Passione create the meal. Nathan and I assumed that it was to be a more "hands on" type of class.  We'll know to ask more questions before signing up from now on!

Andrew arrived to pick us up just in time to help us eat the food - lucky guy, it was good!  From La Chiara di Prumiano, we picked up Emma and Adam and went to Siena - just south of S'ant Appiano.  Andrew dropped the rest of us off and parked Mo Mo while Nathan, Emma, Adam and I went into the Basilica of St. Catherine where we had heard St. Catherine's head is encased in glass.  Sure enough - we found it!  Pictures were forbidden in the church so we did not get a photo of the head.

When Andrew arrived, we walked into the town of Siena and found a snack for our hungry children - Pizza of course!  The slices were large and delicious!  Then on to find the Office of Tourism and plot out our activities for the day.  The office was located in the Piazza del Campo, the main Square, we were given a map and some suggestions of things to do which included climbing the Torre del Mangia on the other side of the square and some walking tours. There was to be a procession at 4:30 beginning at St. Catherine's Basilica through many of the streets in Siena. During the course of the day, we heard drums and saw little groups of costumed men throughout the city whom I assumed were preparing for the procession.

The whole family agreed that climbing the tower was a good idea since we had such spectacular views from the tower in Pisa. In order to purchase the tickets for the tower, we climbed about three flights of stairs to the office (Emma and I were already winded by the time we got to the ticket office).  When it was our turn to purchase the tickets, we were informed that cash was the only form of payment accepted - ugh!  Back down the stairs to find a bank machine that may or may not work with our bank card!  We did find a machine and by some stroke of luck - Andy guessed the right code and we were able to get some cold cash for our climb!  Back up we went, got our tickets and began our climb.

The stairway was much more narrow than the one in Pisa and there were fewer "resting" places.  Several times during the climb, we were forced to stop to let people coming down the steps, pass us - there were many languages spoken and a lot of laughter when that happend!  It was fun!  The view from the top was wonderful - Siena is a beautiful old city and it was certainly worth the climb to see it from that vantage point.  We met a family from Australia at the top who had been touring around Europe climbing towers for the past month - mom, dad and two teenaged sons - they were having a fun time too!

After the climb, we rewarded ourselves with gelato and walked the streets of Siena.  We tried to go on one of the walking tours but got turned around at some point and were no longer on the "tour" depicted on the map so we made up our own tour!  We enjoyed looking around the little shops, sitting in the square and watching the people.

One of the shops that we found sold leather goods made in Tuscany - we went back to that store a couple of times and in the end I purchased a new wallet to match my purse and a new briefcase type bag for work!  Adam and Andy tried on leather jackets but didn't love them enough to bring them home.  While in the shop, we heard the drums again and saw the saleslady who was helping me, head toward the door.  She was very nice and motioned for all of us to follow her.  When we approached the door, the drums got louder and we saw a parade of Priests, other religious people (ie: nuns, bishops??), and many men who were dressed in costumes reminding me of court jesters.  St. Catherine's head was carried through the streets also.  The lady explained that the town was celebrating the 550th anniversary of the canonization of St. Catherine who was from Siena - wow! Did we time this visit well!

The various "court jesters" were from different sections of Siena and each group representing the various sections, carried their corresponding flag. At the end of the parade, many townspeople followed the procession which was headed to the Piazza del Campo (square).  It was a sight to see and we felt very fortunate to witness such an event.

During this time, Nathan had gone on his own to find an Italian flag (he has decided to collect flags from the various countries we visit), which he found and purchased. After the procession, we found Nathan and a nice quiet restaurant for dinner and ate pasta (of course!)  The dinner was good, but we just couldn't resist heading back to the pizza shop and ordering one for the road.  The pizza was HUGE (as you can see from the photo above!).  The pizza guys were very friendly, made our pizza, snapped some pictures and we were headed back to the car --- munching on slices along the way!  Siena was great!
Posted by La Famille Burns at 11:06 AM