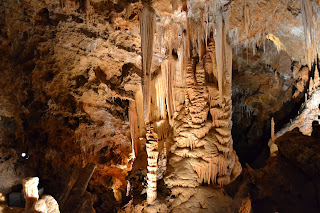 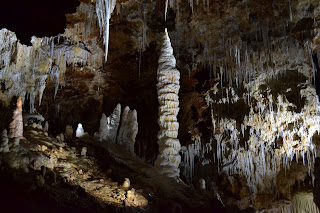 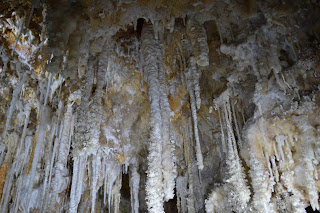 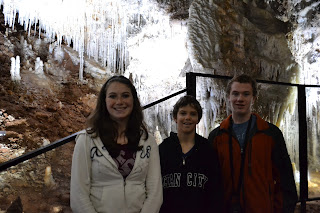 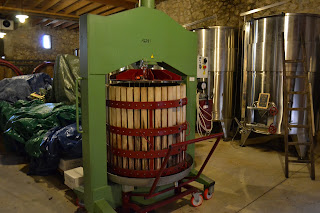 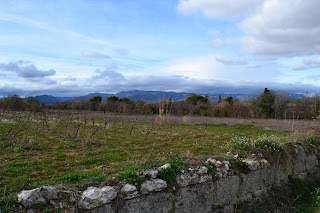 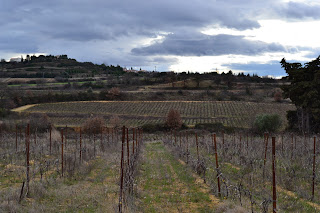 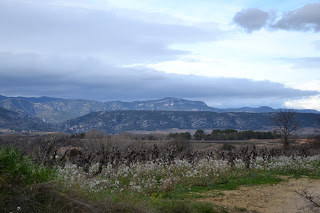 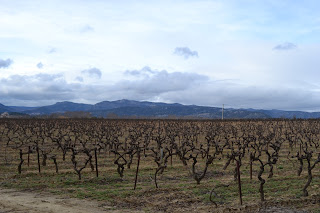 We agreed to let the kids sleep in on Saturday with the understanding that they would be up and ready to go to the caves by 10:00 or 10:15 (latest!).  Andrew and I, however, woke up, got dressed, and headed to the Montpellier market since Andrew had never been there before.  Mrs. Boisson took me during our second weekend which was my introduction to french markets.

By 8:30 we were headed to the tram which took us to Place De La Comedie (the cool square that has been mentioned before in my blogs).  From Comedie, we walked through the town/village, through the mini arc de triumph, across the beautiful "green", down the steps to the aquaducts where all of the vendors were all set up peddling their foods and wares.

Our first stop was a booth that I liked during my first visit with Mrs. Boisson - a basket booth where the baskets are made in Madagascar.  The baskets are traditional straw baskets of various shapes and sizes, many with colorful circles or flowers woven into them.  The prices are great too!  The big baskets range from 10 euros to 20/25 euros.  I will probably end up buying one of these soon, but didn't on Saturday.

From there we browsed the many other booths and enjoyed sampling the various sausages, cheeses, breads, dried fruits, jellys/jams and fresh fruits. One booth that we spent some time in sold herbs and spices - not only for eating, but also for healing your ailements.  Mrs. Boisson explained during our first visit that if you explain a health problem that you are experiencing to the folks at the booth, they will recommend a natural remedy from their stock.  Andrew and I liked smelling the soaps and did purchase some Tumeric because I've recently heard of its benefits for memory and as most of you know - I need help with my memory!  Now I need to figure out how to cook with the tumeric (please send any favorite recipes to: eburns5@sbcglobal.net :) ).

We ended up heading out of the market about 1.5 hours later with several jars of jelly, dried fruit, pears, fresh thyme and tumeric.  We would have liked to buy some fish, but we didn't recognize the kind of fish that was being sold - "oh well", we thought, "there's always Carrefour Market" (the grocery store).

On our way home, however, we passed a very small farmers' market and noticed a couple of people selling fish - and one of the fish was salmon - ah ha!! We know salmon!  We approaced the trailer and asked our famous question of the fish sellers: "Parlez vous anglais???" to which they replied with a smile "non".  O.K. - what's the word for "bone" ???  We needed to know if the fish had bones or if it had been filleted (sp??). So begins charades once again.  As Andrew points to his arm, finger and the fish asking (in english) "Are the bones still in there??" The nice man and woman look at each other, look at us and.... smile with a quizical look. Andrew takes the woman's hand, gives her finger a slight pinch and points to the bone, finally their faces light up and they say "Os!", we repeat "os"?? and she nods, takes a piece of paper and writes down "OS" and then tells us that the bones have been taken out while pointing to the areas where they used to be in the salmon.  GREAT!  We buy some salmon and head home to the kids.

We didn't get out of the house by 10:00, but we were on the road by 10:15, heading to Grottes De Clamouse which are located exactly where we hiked with Andrew's boss, husband, and friends a few weeks ago.  The caves were amazing, we got great pictures, the tour guide was very nice and tried to explain things to us in as much english as he could.  We had a nice 1.5 hour tour then headed back to the voiture (car).  Since the kids couldn't agree on what to do next - go to another cave or go home, Andrew and I made the decision and headed in the direction of home with every intention of stopping at a few of the wineries along the way. (the kids were thrilled!! - NOT!)

Our first stop was Domaine Croix de St. Privat - a simple little tasting room that was locked upon our arrival.  The wineries around here are not staffed 100% of the time since the visitors are few and far between I assume.  When the family saw us pull up, the woman of the house jumped down off of the tractor that was in some part of the olive oil production and bottling process that they also specialize in, and came to unlock the door.  She was very nice, as was the seven year old little girl who came to help her pour our three samples.  We enjoyed the wine and bought one bottle.  On to stop #2 - a little wine store along the way that samples and sells area wines. We sampled three reds and bought two.  Our last, and favorite stop of the day, was Domaine de Rieussec in Gignac France.  We were greeted by, as you can see, breathtaking scenery and a very friendly barking Irish Setter named something in french that has to do with candy - we never did quite "get it".  Marie-Helene Deltort (an attorney in her spare time) emerged from the house, shook our hands (the kids came into this one with us), and led us inside a stone barn type building where the wine is fermented in vats.  Between her broken english and our broken french - we learned that all of the grapes were grown on the property and fermented in the vats for one year.  When it was time to taste, Mme Deltort brought 5 wine glasses out, we laughed and said "non, non", however she did give a glass to Nathan who was very proud and excited to experience his very first official wine tasting!  The glasses were taken to the vats and filled directly from the spicket - that was a first for Andrew and me!  She explained that the wine is the same in the bottles as in the vats.  We liked the wine and bought some to take home.  After our tasting, Mme Deltort invited us to tour the gardens and the vineyard and to walk up a path where there is an old Roman church.  We all began to walk but only Nathan and I made it to the church which was much further than we had originally thought.  What a view those Romans had from that church!  By the time we were finished snapping our photos, we realized that the rest of the family had been waiting a long time so we ran down the path, back to the garden and car.

The drive home was uneventful (suprise!!!).  When we got home, the weather was gorgeous.  Andrew changed into shorts and the two of us walked to the Boucherie for the first time to buy fresh meat for dinner (dindie - turkey), from there we went to the Boulangerie for fresh baguettes, the marche for veggies and cheese and poked our head into the epicerie to find out what an epicerie was - it ended up being a little grocery store.  It was a lot of fun walking to the various little stores and we will be going back to get more fresh meat since it was sooo good!

Andrew cooked up a nice dinner while the kids and I headed next door to St. Bernadettes for mass at  6:30.  Then we had a relaxing evening watching the news of course since that's all we get on the TV, and working on our big puzzle.  The kids were on the computer and we all downloaded our pictures from the day on Facebook. We rested up for our trip to Avignon on Sunday!
Posted by La Famille Burns at 10:50 PM