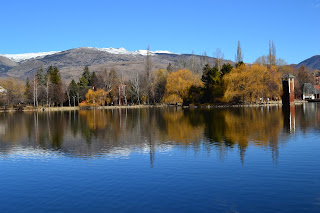 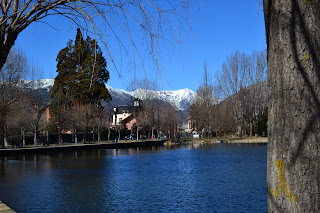 Sunday began much like Saturday, we woke up at the same time, got dressed and ready, and headed downstairs to breakfast.  As soon as Hugo heard us coming, I heard the espresso machine start - fresh coffee coming my way!  Janet greeted us in her wonderful British accent "good morning, are we ready for breakfast?" and out came the fresh croissants, bread, homemade jam etc.... again - we loved it all! After breakfast we cleaned up the rooms, put all of our luggage in the kids' room so Janet could clean ours for the next guests. There was NO WAY that the skis, boots, poles and luggage were going to fit in the Peugeot - Janet and Hugo offered to keep the luggage for us until we came past on our way home.

We loaded everything and everybody into the car - not quite as much stuff this time since Emma and I turned in our skis - now from the rear we saw: Nathan's head, skis, Emma's head, skis, Adam's head, skis - and there was no complaining!  We made it to within 1.5 minutes of Les Angles, followed all of the right signs, passed everything that we knew we should pass, but realized that we were driving much longer and further than we thought we should be.  Andrew (driving beautifully around all of the sharp turns and avoiding the crazy, impatient drivers who pass 2-3 cars at a time around curves!) decided to pull over and check the map.  Just as he pulled over, another car pulled into the same area so Andrew got out and chatted with the fine fellow who told us that we were exactly in the right spot - we just needed to drive another minute and we'd be in the parking lot next to the ski lifts!  O.K. - Merci Beaucoup!  As Andrew got back into the car, the rest of us looked at the nice man who had actually pulled over because nature was calling - he was then in the process of unzipping and doing his business, right there along the roadside - (not uncommon as this is not the first time we've witnessed it and just wait until the end of my story today - I've got a doozy for ya!)

Sure enough - we drove around two more turns and the parking lot/ski lift was right in front of us!  The boys donned their ski attire, purchased the lift tickets which were the traditional tag on the zipper of their coat style and were ready to go!  Emma and I hung back at the car looking at the map so Emma understood where we were going as she was the official navigator (she named herself the mapinator - very cute so we went with it!)

Janet suggested the day's activity for Emma and me - since we were within 30 minutes of the border with Spain - she suggested that we visit the lovely little town of Puigcerda Spain which is just on the other side of  the border and happens to hold a very nice open market on Sundays. We loved the idea of saying that we went to Spain for the day and were very excited about going on our own!  While saying good bye to the men in the family, we heard comments like "good luck!", "maybe we'll see you later", "meet us here at 2:00 -or whenever you can find your way back" - Ha!  Thanks for the faith boys - I hope you roll down the mountain!

Emma was in the front seat, map in hand,  I was behind the steering wheel and we were ready --- and guess what - we DID NOT get lost - ha!  We enjoyed the drive around the windy mountainside, not as sharp as the other ones so we could appreciate the scenery and even pulled over several times for pictures. We cheered as we entered Spain, Emma snapped the photo above just at the right second and we were ready to find the market ---- and a parking space!

As we crossed the border (it was like passing into Indiana or Pennsylvania from Ohio - no biggie!  I would have liked to have had my passport stamped though!) we were dumped into a round about and weren't sure which little road to take so we drove around the round about a couple of times and kind of felt like one of those little balls in a roulet wheel - where will we land???  We finally chose a direction and drove, up and around and around and around.  Eventuall a sign for the tourism office was spotted - the office was never found, but by following the signs, we stumbled upon a decent parking spot and took it. Emma got out of the car, looked around and I did the same, we were already impressed with this place!  As we began walking, we didn't know where we were heading or where the market was, Emma looked down a side street and said "hey mom look - there's a pond" - we turned down the street and went to see the pond which was amazing.  As you can see above, the backdrop to this lovely pond, was a row of trees with quaint little buildings tucked within them and snowcapped mountains just beyond - we were both in awe, it was as if someone made a painting come to life.  We continue to be amazed by the beauty that this world has to offer and continue to be sooo thankful for this opportunity.

Emma and I snapped a bunch of pictures, trying to capture the essence of this feeling to pass on to friends and family - it's just so hard so - you must all come and visit us within the next 4 mos!

As we continued walking, I was able to ask a group of people (in french) who, for all I knew spoke Spanish, where the market was s'il vous plait :) -- they pointed down the road  said droit (right) so we kind of got the idea.  As we got closer to "droit" we saw more and more people carrying bags and baskets filled with goodies but still saw no signs of the market.  A very nice police officer was directing traffic in the town square just ahead so, already having chatted with a group, we bravely approached the nice police officer and I said our favorite line "parlez vous anglais?" and he said "non" so I asked "Ou le marche s'il vous plait?"  and he smiled while pointing down the hill where we saw more and more people coming with bags and baskets.  By this time I realized that the nice police officer had directed traffic, listened and talked with me while walking Emma and me across the busy intersection - what a nice guy and what a dumb tourist!  We said our Merci Beaucoups and headed down the hill to a wonderful market where people were selling fruits, veggies, flowers, clothes, shoes, THONGS (not shoes!), jewlery, toys etc.... The difference between the market that we saw in Spain and the ones we have been to in France I noticed, was that there were no fish, cheese, or bread carts/tables.  They did, however, have Spanish strawberries which Janet made a point of mentioning and highly recommended that we purchase if we saw them because they are delicious and in Spain, the strawberry season had started.  Sure enough - we did see them, waited for the reasonably priced ones, and bought two boxes - one for the Burns family and one for Janet and Hugo.  We also bought two apples, 8 yellow plums (which we got to taste first and loved) and a cute purple jacket for Emma.  By the time we finished shopping, our standard line was "Merci, Gracias, Thank you!"

Emma and I had a very nice day together enjoying this little area of Spain - if you check the map from yesterday, you will see it marked with a "D". It is the northeastern corner of the country and just north of Catalonia (not marked)which is an area that has been autonomous on and off through history - it is a little area of Spain with its own culture and language - for all I know, some of the people in the market were speaking Catalan in addition to the Spanish and French people we heard.

We stopped into a little cafe half way through our day where Emma had a donut and I had a coffee - we watched the people pass outside the window and chatted about the nice policeman as we watched him maintain traffic order in the square.  After delivering our goods to the car and walking around for awhile longer, it was time for a quick lunch and our trip back to get the guys.  After trying, without success, to read some of the spanish menus, nixing the two restaurants that had an English page due to price, and deciding that since we were in Spain, we shouldn't eat at the German Bier Garden, we settled for pizza at "The Pizza Stick" (pizza is afterall a universal food!).  We loved the pizza, found our car and left our the adorable little town of Puigcerda.

We got back to Les Angles without a problem.  The guys had had a fantastic day of skiing and were doing better than ever!  Andrew even commented that Nathan is now a better skier than he is and that Adam has come a long way since Saturday morning. They decided to take a couple more runs, then we packed everything up and headed down the mountain to Mont Louis to return all of the ski equipment.  We made it back to Janet, Hugo and Hotel De La Fontaine to pick up our luggage and were treated to a tour of Hugo's "barn" (see yesterday's posting for that description).

OH Yea!  The Doozy! -- On our way down the mountain, we drove around a slight corner where a car was pulled over just before a round about - right there, in front of anyone coming down the mountain, a poor little girl was folded in half like a taco and being held in the air by her father, with her bare bottom exposed for all to see -- peeing on the road - not squating, not sitting - she was held in the air and folded up so as to not get her clothing wet!  Her only saving grace - nobody could see her face as her head was buried in dad's coat someplace!  Just when you thought you'd seen it all..... - ha!

We made it home safe and sound and didn't get lost - a biggie for us!  I think we all agree that Nathan's choice of a birthday gift was appreciated by the whole family -  Everyone had a great weekend, and although I didn't get to spend most of his actual "day" with him, I know that he was having the time of his life on othose mountains and did something that he will remember forever.  Nathan's birthday dinner????  Pasta - we had nothing else in the house and as we all know by now - nothing is open on Sunday! We made it up to him by letting him pick out a fantastic cake on Monday!
Posted by La Famille Burns at 12:08 PM